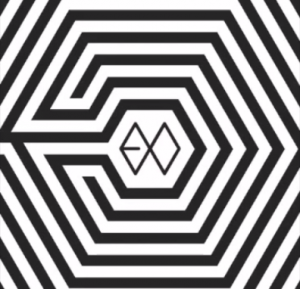 Since 2012, EXO has amazed the K-Pop world with their quick rise to stardom. Since then, fans have eaten up every release from “Mama” to “Growl” to “Miracles in December.”

In May, EXO released their long-awaited second mini-album Overdose following a delay to mourn the lives lost during the Sewol Ferry tragedy.

Even though it only has five songs, it is sure to please any EXOtic.

EXO-K’s album lit the music charts on fire even before its release, ranking high on many music charts and winning many of the music shows once it officially came out. But, did EXO-K live up to all the hype with Overdose, or is the group losing steam?

“Overdose” has an exciting, heart-pounding beat that makes it worthy of being the title track.

“Overdose” isn’t shy. For dance-track lovers, the song has dubstep layers with an addictive chorus. It has a strong electronic sound, adding to the fun.

While the chorus is outstanding, the rap portions feel weak. Part of EXO’s appeal when they released “Mama” was the bombastic, electrifying rap. EXO stood out then because of the hardcore influences, but with “Overdose,” the rap didn’t stand out from what other K-groups are doing.

Of course, “Overdose” wouldn’t have worked with a metal-type rebel yell, but it felt like something was missing in the rap portions. A little more power could have made an already great song become amazing.

SM songs usually have weak lyrics, but “Moonlight” breaks the mold and stands out as a lyrically-impressive piece.

Based on the title alone, “Moonlight” sounds like it would be a continuation of the wolf theme carried out in “Wolf” and “Growl.” It isn’t, but it is a heartbreaking tale of the one-who-got-away: “A place where I can’t touch you and can’t even hold you.”

Given the lyric’s beauty, the song failed to impress once put to music. It’s a ballad as come to be expected given the tone of the lyrics, but it’s nothing special. “Moonlight” comes across as a forgettable, throwaway tune. It has a nice R&B beat, and the echoes provide a haunting touch, but the music makes the song unmemorable.

Like “Moonlight,” “Thunder” has a strong lyrical presence. However, the two songs are almost too similar in content to the point the lyrics feel almost interchangeable. But, “Thunder” takes the theme from both songs a little further by covering finding lost love.

“Thunder” has a significantly better sound; the mid-tempo beat saves the song. EXO also exhibits great falsettos, and the “ooh, ooh, ooh” portions just sound amazing when heard through headphones. EXO-K’s voices blend well with the “boom” and “thunder” repeats, and the last verse has a solid bass, adding a nice feel to the song.

If “Overdose” wasn’t the title track, “Run” definitely should be! This song is just addictive fun. It’s an awesome dance track with a bit of a ‘90s feel mixed with some Spaghetti Western soundtrack nuances. Hopefully, EXO-K chooses to release this one prior to the summer months because it has the potential to earn plenty of air time as a great summer tune.

The lyrics aren’t as spectacular as “Thunder” and “Moonlight,” but it doesn’t matter because the beat and sing-along-factor win for this song. The lyrics reflect a summer fling and recalling those memories. Besides being fun, it’s a simple, cute song.

At times, the music does drown out EXO’s voices, especially at the bridge. If the music was toned down just a tad, the overall song would have been perfect. However, this minor issue is easy to overlook.

After a few listens, the title looked like EXO was begging fans to “love, love, love” this track. It didn’t work since this is the weak-link on the album and a hot mess. It felt like two songs spliced together with the tempo shift that came with “‘Cause, you’re my earth, air, water, fire (You’re my) earth, air, water, fire” line. This just didn’t fit with the song as a whole.

Another element that didn’t work was how the chorus’ beat and EXO’s singing reflected the old children’s song “Nana, Nana, Fufu.” This made the song feel more annoying than enjoyable because of how childish it sounds. Few artists can pull off these elements, but they are usually female and walking the fine aegyo-line, much like Fiestar did with “I Don’t Know” with the “Ten Little Indians” beat. Male groups cannot pull this off as well.

One of the better elements of “Love, Love, Love” is how the music featured traditional Asian instruments. This was awesome considering how the elements of nature played a part in the actual song. In a way, the song recalls EXO’s “Mama” and “History” days when each member reflected a different element of nature. This was a coy nod to their past, making the song slightly better than what it is. 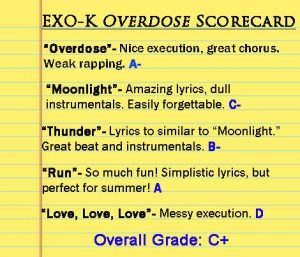 While Overdose has a couple of great standout songs in “Overdose” and “Run,” the overall album wasn’t as impressive as their debut or first full-length albums. They have improved lyrically, but the overall album felt like something was missing.

Of course, it still sold thousands and it is dominating the charts, so fans are thrilled and that’s what matters. Overall, it was just not as exciting as expected.