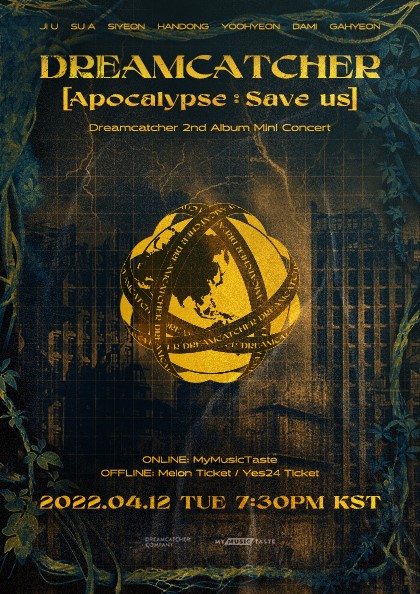 This mini concert revolves around their 2nd Album, [Apocalypse : Save us], marking this as another milestone in their growth as the queens of online concerts and live performances. The full-length album is set to have a tracklist of more than eight songs, introducing a new side of themselves and the start of a new era – ‘Apocalypse’ after their previous ‘Nightmare’ and ‘Dystopia’ series storylines.

From their live band concerts to their themed events with Halloween and dystopian aesthetics, the girls have evolved with online concerts in using groundbreaking XR technology for new stages. They’re gearing up for another mind blowing concert with the added joy of having fans present in-person, taking the stage to another level.

With their previous online concert bringing in over 10,000 fans, the girls are expected to break barriers once again with their in-person concert being streamed globally for their fans from all over the world to tune into.

They’ve garnered attention with their Billboard World Digital Song Sales Chart hit “Odd Eye” and their previous releases of chart-topping hits like “BOCA”, “Scream”, and “BEcause”. From strong dynamic tracks with powerful vocals to beautiful soft ballads, Dreamcatcher has captured the hearts of music fans both domestically and internationally.

As with the start of a new series, ‘Apocalypse’ is gaining attention from just the release of the mysterious teaser that revealed the full album release set for the same day as the live mini concert, exciting fans who marked off their calendars for the day in preparation for the next beginning of a narrative only Dreamcatcher can create with their music.

The group is preparing to meet their fans face-to-face with their concert on April 12th 7:30PM KST in Seoul, but global fans can also tune into the concert online to meet Dreamcatcher and enjoy the show together in real-time. Dreamcatcher 2nd Album [Apocalypse : Save us] Mini Concert is set to reunite InSomnia (fandom name) with Dreamcatcher once again, as they start off the year of activities alongside their next new series.

For this concert, Dreamcatcher continues their collaboration with MyMusicTaste, a technology forward platform that breaks the barriers set by the pandemic and brings fans and artists together to create a new way of connection.

All offline in–person events follow local jurisdiction protocols to ensure a safe environment for the artist, fans, and staff present at the venue.

Further information regarding online ticketing and the show itself can be found through https://mmt.fans/hEVn or through MyMusicTaste’s other social media channels.