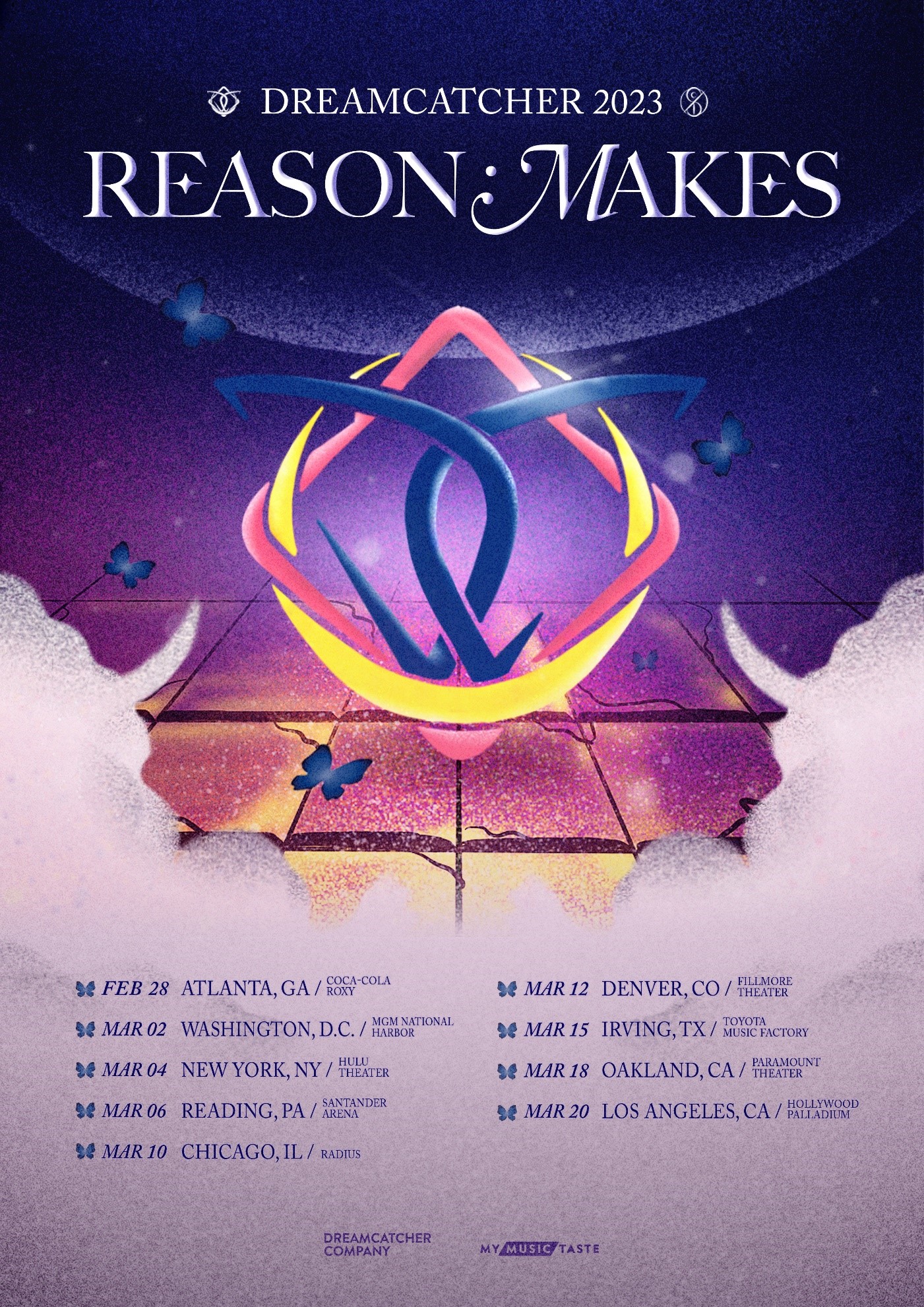 K-pop’s concept-shattering girl group, Dreamcatcher, is coming to the US with their REASON: MAKES DREAMCATCHER 2023 after a successful tour in the US in 9 cities and following a new Digital Single release. The girls are ready to take on nine cities in the U.S., with stops in Atlanta, Washington, D.C., New York, Reading, Chicago, Denver, Irving, Oakland and Los Angeles. The Europe tour kicks off starting in Atlanta on February 28 and continues on through seven more cities before reaching the last stop in Los Angeles on March 20.

K-pop girl group Dreamcatcher has received love from K-pop fans all around the world and was crowned “2022 Best K-pop Star” female idols by Forbes Korea. The group will reunite with their fans in the U.S. through their REASON: MAKES DREAMCATCHER 2023 tour. Their show in Los Angeles from their last U.S. tour was sold out along with other cities. Dreamcatcher has since then gained more attention and is excited to be back for this coming tour.

The 7-member girl group Dreamcatcher who debuted with the single “Nightmare” in 2017, have spread positive influence as a “global K-pop messenger” by addressing significant societal issues including topics like nightmares, the risks of the digital age, and the effects of climate change. In addition, Dreamcatcher has captured the hearts of music fans both domestically and internationally, showing aspects of a well-rounded idol with a variety of charms from strong dynamic tracks with powerful vocals to beautiful soft ballads. In recognition of their musicality, Dreamcatcher achieved remarkable achievements last year with their first music show win in Korea through their latest hit “MAISON” in 1,924 days since their debut and being invited to a big music festival “Primavera Sound” in Barcelona, Spain.

Dreamcatcher showed extraordinary love to fans by preparing meaningful gifts. On January 9, despite the busy schedule ahead of the U.S. tour, Dreamcatcher surprised fans with a “Special Mystery Code” teaser for an upcoming release indicating their 6th year anniversary on January 13. The Special Digital Single “REASON” celebrating their 6th year anniversary contains a message to fans who have been by Dreamcatcher’s side for six years, from their debut title “Chase Me” to “VISION”, and it’s a promise to those who want to spend more time together.  Dreamcatcher’s “3D VR MUSIC CINEMA: The Curse of the Spider” was released for free for a week, leaving a deep impression on InSomnia (official fandom name) around the world.

Fans are paying keen attention to Dreamcatcher as they are known for showing various performances across genres as self-certified talented idols. InSomnia (official fandom name) are especially excited as Dreamcatcher will be back with a new setlist. Dreamcatcher, who have continued to grow rapidly in every album, are getting ready to prove their global popularity through this U.S. tour.

Tickets will go on sale on January 19 at 12:00 PM (EST) local time. Information regarding ticketing for the shows can be found on : https://mmt.fans/bnfE

MyMusicTaste organizes fan-initiated concerts around the world. We’re driven by our mission to connect and amplify the voices of fans all over the world. We’ve successfully promoted concerts of artists such as EXO, Machine Gun Kelly, ATEEZ, and more in over 40 different cities. With the simple idea – empowering fans to bring their favorite artist’s concert to the city of their choice based on fan demand—MyMusicTaste is challenging the $27 billion concert market through cutting-edge technology and sophisticated, user-friendly service. Our service currently supports more than 30 countries and offers 15 languages. MyMusicTaste is truly growing as a global service. Our investors include Com2us, SK Networks, Kolon, Samsung Venture Capital, Golden Gate Ventures, KTB network, SL Investment, and umerous global firms that are recognized worldwide.

Established in 2008, DREAMCATCHER COMPANY is a South Korean record label and entertainment agency founded by the prominent production duo E-tribe. Since the debut of its first artist Nassun, the company has grown in size over the years, producing artists and idol groups under its own name. The company also launched subsidiary labels HF Music Company, Dreamcatcher Company, and D1CE
Entertainment is garnering much attention and recognition from the public as the rising creator of future K-pop artists.