Another new segment we’re introducing here at Kcrush is Drama Thursday. Drama Thursday will introduce you to different Asian (Korea, Japan, China, and Thailand) dramas and movies that may fit any mood. Some you have heard of while others may be obscure to some audiences. We’re not just focusing on new movies and dramas, but old ones as well!

This week, we’re hopping in our Way-Back Machine to 2006 to look at Love Com. The Japanese romantic-comedy was directed by Kitaji Ishikawa and starred Ema Fujisawa as Risa and Teppei Koike as Otani, the story’s protagonists.

Love Com is the live-action movie adaption of the popular shojo manga Lovely Complex by Aya Nakahara. The award-winning manga ran from 2001-2006 and was published by Shueisha in Bessatsu Margaret. The movie followed in 2006; a video game came out in 2006, and the anime aired in 2007. The sequel to the manga, Lovely Complex D ran from May 2009 to June 2012.Love Com

Love Com is a cute movie that focuses on Risa and Otani. The two are a comedic pair with Risa being taller than her basketball-playing male counterpart. The duo is similar in personality, which is why they get along so well until Risa realizes she has feelings for Otani. Their friendship was definitely the most realistic element of the movie as Fujisawa and Koike have great chemistry together. The movie is worth watching for the two of them alone because they felt like they weren’t playing roles but were actually friends in real life.

Without giving too much away, the movie itself stays fairly close to its manga counterpart with a few omissions (Risa’s birthday) and slight changes in the ending. Otani and Risa’s relationship maintains its adorableness and realism as they go through high school. Their friends also play well off of Risa and Otani, building on the enjoyable factor.

What stands out are, of course, the quirkier characters like the homeroom teacher and his ever-changing toupees and the ridiculous factor of “Mighty,” a homeroom teacher who is way too in love with himself. They serve as great reminders that Love Com is irrelevant fun. 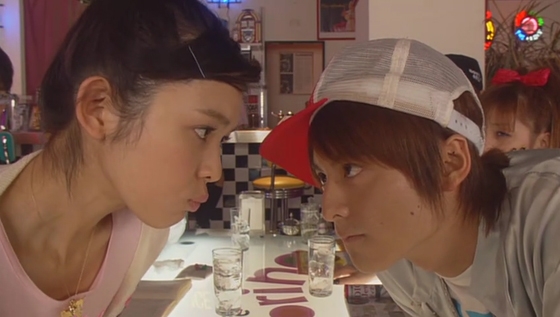 For some viewers, Love Com might be too much to handle with its quirkiness. For example, Risa’s sister is too deadpan to be taken seriously at times, even though she is enjoyable for those who enjoy purposefully bland characters. The homeroom teacher provides some much needed comedic intermissions, but some viewers who are not familiar with the manga may wonder about his purpose. Then there’s Mighty, who is really handsome, but his addition just makes the film drag weirdly toward the end. No matter how hysterical of a character Mighty is, sometimes he feels unnecessary to the story.

The dragging out of the end is Love Com’s main issue because there are several points starting around the 45-minute mark where the movie could have ended several times. This was the problem with trying to condense 17 volumes of story into one hour-and-a-half film. The movie, perhaps, would have worked best as a live-action drama because storylines could be explained better and explored more, especially if viewers jumped in without reading the manga.

Overall, if you’re looking for cute, funny, and irrelevant, Love Com is a great movie for you. What’s great too is that it’s available on YouTube with English subs. While it’s not the best movie out there due to awkwardness, it’s a nice story to keep your mind off of some of the bad things going on in the world.