Drama and Movie Thursday: Last Life in the Universe

For this week’s Drama and Movie Thursday, we travel to Thailand to view 2003’s Last Life in the Universe. The film, directed by Pen-Ek Ratanaruang, stars Tadanobu Asano as Kenji and Sinitta Boonyasak as Noi. Like with last week’s Hana and Alice, the film sounds interesting on paper, but length and confusing cinematography make it draggy and confusing for some viewers.

Asano plays Kenji, a librarian at Bangkok’s Japan Foundation. Kenji is a quiet, organized man who gets thrown into chaos by his brother Yukio, a Japanese yakuza member. When Yukio is killed by his friend Takashi, we see Kenji’s story unfold along with his suicide fixation.  From here, a series of unfortunate events unfold that lead Kenji to kill a man, attempt to kill himself, witness a deadly accident, and then find himself entangled with Noi (Boonyasak).

Kenji and Noi form a bond over lost siblings, but the two are quite different. As the film unfolds, we see them flirt with romance only to have the bond tested by an abusive ex and the yakuza until the story ends in a surprising way.

Kenji and Noi seem connected by fate as serendipity and unfortunate circumstances bring them together. The pair complements each other well and remains a focal point even though there is a constant sense that something bad will happen. Last Life in the Universe is built on gloom and doom, so anything of the contrary would derail the film’s dynamics.

From the beginning, it’s clear the film would be void of joy. The opening focuses on Kenji’s dwelling: Categorized books, beer neat and orderly, the space overwhelmingly sterile. Kenji, too, is more sullen than lively. The entire time, we see him imagine his suicide scenarios, leading the film to take on a dark comedy vibe at times. He wishes to be physically dead, but the audience already sees he is mostly dead in spirit.

Kenji is contrasted by the livelier Noi. His pot-smoking, slovenly mate symbolizes disorder as everything around her is unkempt. From the moment she appears on screen, it’s clear she is going to bring disorder somehow to Kenji’s life, and this is even before they are directly connected.

Their connection should be something that would require beautiful storytelling; this is not the case. Their pairing just brings confusion as time and space seem scrambled throughout the first portion of the film. Surreal elements like a home cleaning itself and bending time actually make the audience feel like they are smoking Noi’s pot.

These elements make it difficult to really determine what is false and what is reality, leading the film to become a confusing journey. There are a few things we know are true though:

Once these elements are firmly in place, then parts of the story make sense. 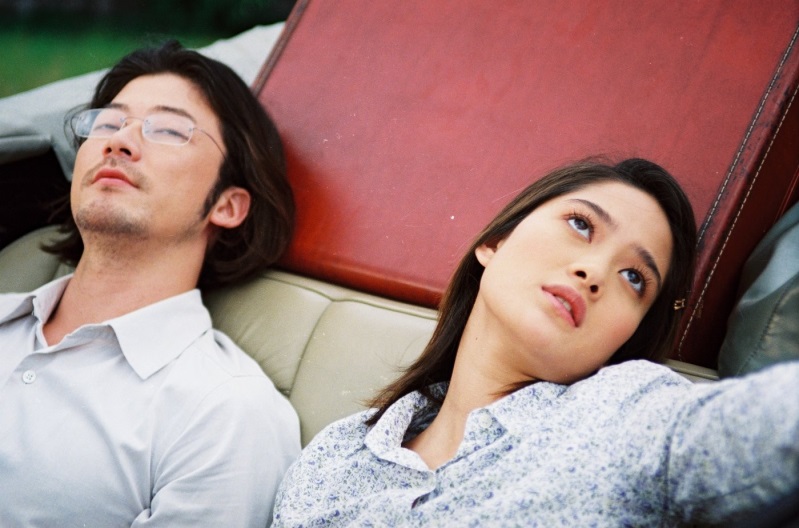 The ending may throw people for a loop as the film enters a split screen with alternate endings side-by-side. It’s up to the audience to decide which is real and which isn’t while using clues from past sequences to determine which is the true ending. Some may akin the technique to the final scene of Lost in Translation when Bill Murray whispers in Scarlett Johannson’s ear: You may never know what is said there, just like you may never know what is the true ending of Last Life in the Universe.

Even though there are some messy follies, the film does excel in small elements. These elements such as three languages (English, Japanese, and Thai) being spoken, the appearances of lizards, and the contrasts between order and disorder help move the story along. It’s fun to watch for the little things, especially as the film heads toward drag territory in the middle.

All elements combined, there is an interesting story at hand, but keeping fantasy and reality straight make following the film a chore at times. If you’re someone who isn’t into artsy films, this may not be the movie for you. Otherwise, it’s an interesting journey that’s worth following to some degree.

You can find Last Life in the Universe on Veoh.