Casting Spirited Away as Live-Action Films

On July 20, 2001, Hayao Miyazaki’s Spirited Away was released in Japan, making the film 15-years old this year. Miyazaki’s masterpiece continues to influence people today due to its imaginative writing, detailed animation, and artful spirit knitted into the fiber of a coming-of-age yarn about ten-year-old Chihiro Ogino.

Chihiro is a typical ten-year old who gets whisked away to a magical world after her father gets lost driving to their new home. She has sassiness and innocence as she learns how to mature on her journey. Anderson-Emmons, Ahn, and Hamada all have accomplished careers, and all are under the age of 14-years old! Anderson-Emmons, known best for her role as Lily on Modern Family, can do sassiness and innocence well. Ahn–known for her role as Nami in The Housemaid, Go Hye-Sung in Dream High, and young Min Deul-Re in Single-Minded Dandelion—would provide the wide-eyed wonder and amazement Chihiro possesses. Hamada (Oshin), on the other hand, has the emotional range to carry Chihiro’s high and low points throughout the film.

Haku, the spirit of the Kohaku River, is stoic and kind even though he has a tough exterior. Oh, and he’s a dragon too. His live-action counterpart needs to possess a level of darkness, mystery, and hopefulness to maintain the role.

British actor Ben Barnes, who has starred as Prince Caspian in The Chronicles of Narnia series and Sam Adams in Sons of Liberty, is the oldest choice at 34, but he has youthful charm. Throughout his career, he’s played several roles that involve charming or brooding leads. He would be able to provide the brotherly guidance Chihiro needs to figure out her journey.

Yoo has poise and seriousness thanks to his roles in historical dramas, giving him an edge to play someone who is a river spirit. At 22, he has a resume that gives him experience beyond his years, helping him play a role as a young person who is, essentially, several centuries old.

For a mysterious edge, Hongo (Shin, Nana 2) always has a stoic expression but an ability to provide emotion when needed. He has a slight coldness to make him detached from his memories, helping him succeed in a role that makes him a good guy as well as a potential issue while under Zeniba’s spell.

Twin witches Yubaba (the good sister) and Zeniba (the owner of the bath house) need someone capable of being a grandmotherly and dastardly in order to bring the roles justice. Midler already played a witch in Hocus Pocus in the 1990s, so she can recall her role as Winifred to help her get into character. Her humor and big personality as well as her strengths in roles involving heartfelt and humorous characters will make her shine.

Na is more grandmotherly and big-hearted in appearance, providing softness to the role, making her more equipped to embrace the role as Yubaba. If she can channel some hard-heartedness, she could be amazing and dimensional as Zeniba also.

Otake has performed and embraced several roles throughout her long, multi-faceted career in Japan. While she looks kind, she can also be tough and no-nonsense. These abilities can help her be a strong performer in a dual role.

Kamajii the boiler man is grouchy and somewhat detached, although he has an almost grandfatherly appeal to him. Danny Glover fits the bill perfectly, and he has the voice for the role. His tough-but-kind persona gives him the strongest connection to the role.

Kim Kap-Soo, however, has the look for the role if given some artfully placed facial hair. The veteran actor has a layer of gruffness, and this is proven thanks to his role in Iris. Kim’s Kamajii could have layers of mystery, causing the audience to maybe wonder if his role as a boiler man could be a guise.

For a Japanese cast, Miura has hints of humor with a fatherly/grandfatherly flair. Miura has charm and an endearing personality to make Kamajii more than a secondary character.

Lin is one of the strong female characters in Spirited Away. While a secondary character, she makes an impression as a firm-but-caring bathhouse employee.

Jamie Chung (Mulan, Once Upon a Time) has had her share of tough-girl roles in her career. Her face has a softness that can help her take on a sisterly role while her personality gives off an “I don’t care” feel. Meanwhille, Jung (Eun Chae-Young, What’s Up) has a cold, calculating detachment about her that makes Lin someone who is detached from her true feelings and only driven by personal gain even though a soft spot can exist if she allows herself to feel.  Maki, on the other hand, has a softer appeal, but she has starred in roles where mental and physical toughness had to dominate, making her someone perfectly capable of helping to run a bathhouse while teaching Chihiro a thing or two.

Chichiyaku is a bathhouse employee who provides some comic relief via his stinginess. Kevin Chapman (Lionel Fusco, Person of Interest) has a thick New York accent and a dry sense of humor that translates well on screen. He can shift from a comic relief role to a raging lunatic by the drop of a hat, so he would be able to shift from a sneaky employee to a stingy money-grabbing man. Kim Gura is a controversial figure, so an audience could develop a love-to-hate attitude with him as Chichiyaku, which is one of the reasons the character stands out and plays a role in Chihiro’s development. Kitano, though, has a rough outer exterior with a background as stand-up comedian to help him shift his personality as the role calls for it.

Aniyaku is another bathhouse employee who provides comic relief thanks to his greed and celebration of No-Face’s arrival and gifts. While his role is small, it’s a light spot in the film. Comedian Gabriel Iglesias could breathe life in Aniyaku’s antics for an American adaptation, while Gag Concert-regular Park could add some of his signature flair. Japan’s Toshiaki and his signature pink sweater vest can add some arrogant stage presence to round out the character. 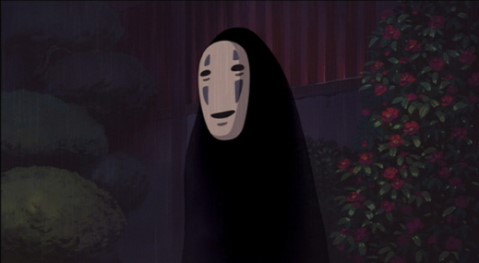 No-Face doesn’t need a specific actor in the role as he is a fictional character. Some clever CGI can bring him to life to take on any form necessary.

There are other characters to cast in the film, but we’ll turn it over to you. Who would you cast for the remaining characters? Let us know in the comments!