One of the reasons fans stan B.A.P is due to their charitable spirits and aim to make Earth a better place. B.A.P’s leader, Bang Yongguk, has even been nominated for the Shorty Awards two years in a row thanks to his activism. On several occasions, Yongguk points out how he and B.A.P support different charitable organizations including UNICEF, One Love Disabled Infant Care, World Vision, and Save the Children.

With the Live on Earth 2016: Awake tour about to get underway, the excited BABY fandom is doing what they can to prepare for B.A.P in the United States. Besides buying, selling, and trading tickets and buying merchandise ahead of time, some B.A.P fan groups decided to put their enthusiasm toward charitable initiatives.

One such group, #ForeverBAPsBABYz (#FBB), is currently seeking food bank donations for several of the US stops, specifically Chicago, Los Angeles, and New York with Atlanta pending.

#FBB began on Facebook in August 2015. The group’s focus is to unite B.A.P fans while working toward helping others in the community. Since the group’s founding, #FBB has made donations to the Global Hope Network International as well as libraries and children’s hospitals through special B.A.P-member birthday projects.

Admins and volunteers help decide and set up projects. They, along with other #FBB group members, collect items and monetary donations and “pay-it-forward” to those in need.

From now until the end of the US tour, #FBB hopes to spread the word about their food ank donation initiative so they can continue to help others.

“We’ve always been passionate and inspired by B.A.P to give back in any way we can and we hope this will be a good way for us to make a positive impact within our communities,” Lyndsay Ludlow, #FBB’s founder and one of the administrators behind the donation drive, said.

According to Feeding America, 48.1 million people lived in “food insecure” homes in 2014. Included in that statistic are households with children.

Even a small donation helps the #FBB food drive and can help positively impact those in need and could even help a child not go to bed hungry. 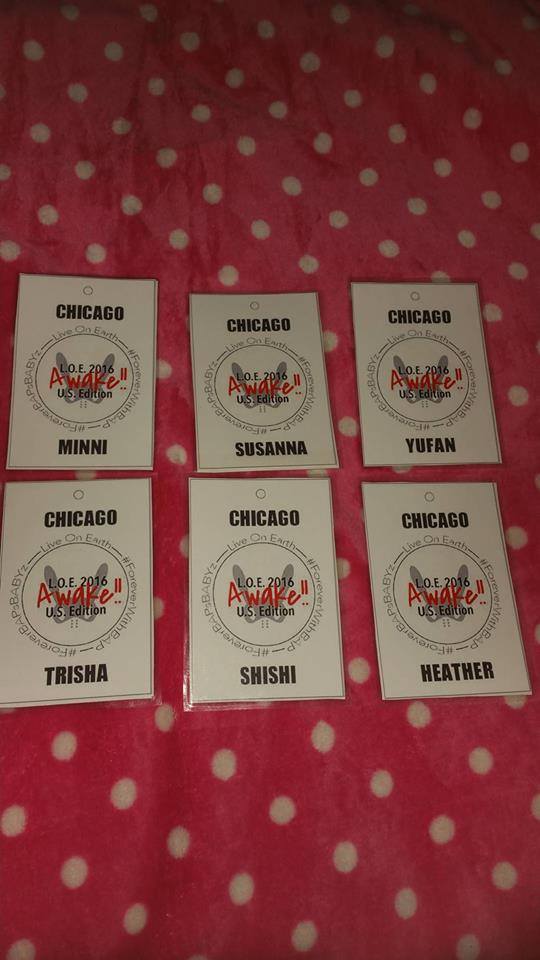 Look for these name tags for your concert venues if you choose to donate. Shown: Chicago stop. Photo courtesy Raychell McCoy.

For the food drive, #FBB hopes to collect non-perishable items to donate to food banks within the cities B.A.P visit. Items the group hopes to collect include canned fruits and vegetables, instant mashed potatoes, ramen, cereal, peanut butter, pudding cups, pasta, rice, and crackers. If it isn’t fresh, frozen, or something that needs placed in the fridge, it can be accepted as long as it is not close to the expiration date or already expired. While not mentioned initially, do not donate recalled foods either.

On concert days, fans can bring donations to the venue to drop off at assigned donation locations and can do so until 45 minutes before the venue doors open. #FBB staff and volunteers will have nametags identifying themselves so they can be spotted easily.

Even if you cannot attend any of the concerts, you can still donate. A few of the cities, especially Chicago, have an online link where donations can be made for the food drive. Even if it’s one can of mushrooms or a jar of peanut butter, your donation counts.

In addition to the food drive, #FBB and B.A.P Yessir (BYS) are teaming up for a banner project. Currently, they have a GoFundMe set up to help pay for fan-created banners to be used at B.A.P concert venues to help show support for the boys. Each donation will make it possible for banners to be available at each US concert location.

For both initiatives, specifically the food drive, the hope is that the Baby fandom will come together for a great cause. Of course, this kind gesture isn’t limited to Babyz, but to other K-Pop fandoms as well. Together, we can help fight hunger! Earth needs you!