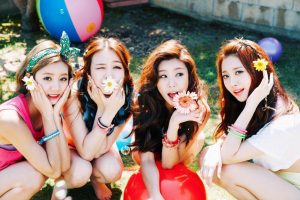 Girl’s Day made their summertime comeback July 14 with their fun and cool mini album Everyday 4. The upbeat sound is enough to take away your troubles, and despite only having four songs (excluding “Darling’s” instrumental companion), it’s worth purchasing, because it’s just that enjoyable from beginning to end.

Right out of the gate, “Summer Party” featuring David Kim sets the tone. The Caribbean Island-vibe of the song just transports a listener to a warm, friendly island where it’s a nonstop dance party. David Kim is hardly noticeable in the song as he’s mostly just background, and that’s a good thing ,because it really should be about Girl’s Day. It’s different to hear them engage in some rapping, but it doesn’t sound weird or out of place. In fact, this is one of those rare K-Pop songs where the standard formula of singing-with-a-complimentary-rap-thrown-in felt perfect in order to set the mood and get listeners excited.

With the intro song, it’s clear Girl’s Day keeps improving with each album. Their voices have more power to them, and that should be attractive to a listener. Harmonies and English pronunciation are better, the latter of which should please some of the International listening community.

The sound introduced in “Summer Party” carries over to the title track “Darling.” The song starts out with a mambo vibe. And, if anyone out there remembers Lou Bega’s 1999 summer hit “Mambo Number 5,” the introduction of the song may remind you of it a little bit before shifting to a cute 1940s big band sound.

The chorus of the song is ridiculously catchy and infectious. The lyrics are super-adorable, which is part of the reason the song is just so perfect for warm weather: It’s a soundtrack of first-love, a date on the beach, and everlasting memories rolled into one bubbly package.

While “Darling” is overall fun, at times, the high notes may grate on some listeners’ ears. The chorus is rife with high notes in the background, and while they seem to fit the song, depending on your listening mode—headphones or stereo—it might be overwhelming. Through headphones, the notes tend to drill right through your head in a startling fashion. On a stereo, this isn’t much of an issue. If you’re sensitive to high pitches, exercise caution when using headphones.

“Look at Me” takes listeners a different direction with its mid-tempo beat. The instrumentals at the beginning of the song sound just as incredible as the song itself. It has an uplifting spirit with lyrics like “look at me now. Look what you see. I’m a beautiful lady.” There’s a certain warmth, beauty, and fragility about the lyrics paired with the instrumentals that make the song stand out more than others including the title track! The only downfall was that the low rap felt out of place a bit. The low tone wasn’t the issue, but the rap could have been left out, because it changed the feel of the song a bit. But, if Girl’s Day needed a second single from the album, this would be it.

“Timing” brings back the upbeat sound to close out the album. As with “Darling,” “Timing” is a listen-with-headphones-with-caution track not, because of the vocals, but because of the track’s chirpy whistling playing in the background.

The chorus, though, is what makes the song wonderful. The rise in their voices makes the song complete and exciting and perfect for a summer road trip to the beach. It’s bright, filled with warmth, and good vibrations. Turning the song up on a good stereo and dancing around the house is advised, especially since it will cancel out the background whistles.

Fresh from their megahit “Something” earlier this year, some fans worried if returning to a cute vibe would hurt Girl’s Day’s chances for further popularity. From the sounds of the album, the girls have nothing to worry about! Way to go, Girl’s Day!