For many young singles in South Korea, they think marriage is a sort of luxury that they have lots of other things to do first. Before tying the knot with their ideal partners, they want to achieve career goals, receive more education and consider themselves still too young to get married. Economic reasons, such as a small income and lacking funds for wedding expenses, were ranked second. Since this social atmosphere continues, recently people are focusing on a ‘reasonable wedding’. It is not easy to prepare an affordable wedding for busy modern people. Including wedding halls, dresses and makeup, wedding photography and honeymoon as well, everybody knows this is a once in a lifetime event, but sadly weddings cannot be afforded because of the expenses and the time to be taken off for the honeymoon.

Thus, it increased that people prepare their wedding through wedding fairs or do their own leg work to save money. If wedding planners are used, it can be more convenient to prepare, but price bubbles such as extra options after wedding contracts are still contentious social problem in South Korea. 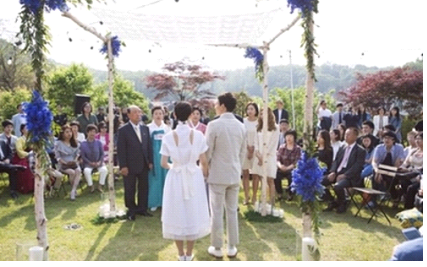 According to the ‘2016 Status Report about wedding expenses’, the average wedding cost amounts to 274.2 million won.  The wedding ceremony costs around 82.4 million won except for housing funds.  Therefore, to reduce the burden of these excessive costs, soon-to-be married couples have chosen to have a ‘small wedding’. They reduce the scale of ceremony such as inviting people, but host a very unique and special wedding. That’s the point of this conception’s wedding.

But a small wedding with good facilities at an affordable price are difficult to find since they are already booked like six months to a year ahead.  In addition, small wedding halls located in cheongdam-dong or Gangnam district are too expensive to use. Those small wedding venue fees are more expensive than regular venue fees.

Q. Who’s normally responsible for paying for the wedding?
Traditionally a few days before the wedding in South Korea, the families will go through exchange of several kinds of gifts. It called ‘honsu’ and ‘yedan’. They include many things such as gifts of household goods, clothing and jewelry between the bride and groom.

Q. How do the bride and groom prepare for the wedding?
1. Create a list of wedding preparations and set up budgets
For marriage check-list, it is easy to research on websites or via married friends or through information about what wedding planners can provide.
And it’s better to do market research for venue, attire, makeup, honeymoon and etc.

2. Venue
When the date is determined, the next thing you have to do is make a reservation to visit the venues.
If your hometown is provinces, you have to consider about this fact.

3. Honeymoon
And the groom and the bride determine duration of honeymoon.
(And if working, check availability of vacation.)

4. Photography, Attire and Makeup
Those three avengers, Studio / dress / makeup, are one of the most important preparation for the bride.
1) Studio (Photography)
Select your favorite studio that has your taste and good atmosphere.
And then make a reservation.
2) Attire Korean Women rarely buy wedding dresses/hanbok (Korean traditional costumes) but rather rent them. Same goes for men as well.
Prices also vary widely, so definitely plan specific budget for it.
3) Hair / Makeup
Even though it is within the same shop, prices can vary by designers. Check carefully.

5. Yedan (gifts)
Originally, the gifts given by bride’s family to the groom and his family, are called ‘yedan’.
But these days that gift is presented by greeting the groom’s family and entering his home. Normally, you have to check out what that groom’s family wants such as only cash or in kind, then right before marriage like one month before, send them the ‘yedan’ by having courtesy and wrapping them with ‘yedan’ envelope and ‘yedan’ cloth.

Q. The top 5 most popular places to have a traditional and non-traditional wedding. 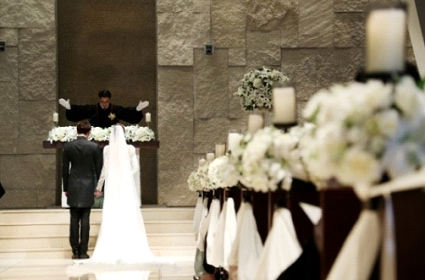 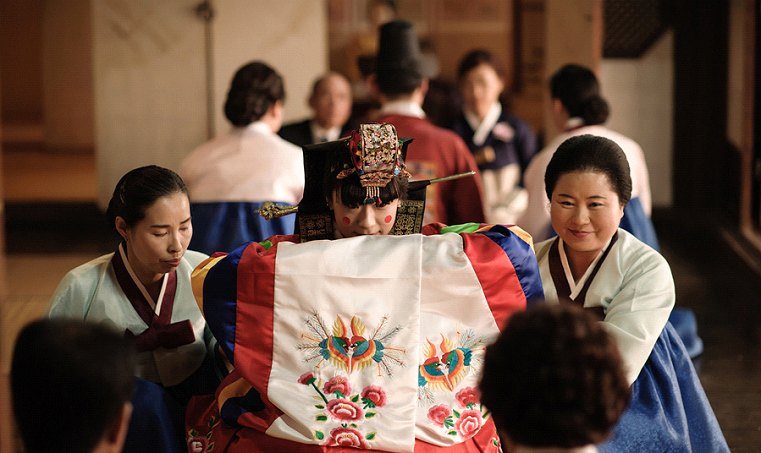 1) At Unhyeon Palace (Unhyeongung)
In Unhyeongung Palace, to hold a traditional wedding ceremony, you can pay as much as $800 US Dollars. (0.9million won). You can hold the wedding at relatively low cost.
2) At Lotte World Folk Museum
They have easy access to airport and downtown in Seoul.
They won’t allow you to get bored at your wedding as they provide various activities like performances and playing Korean traditional music instruments. Lotte World’s traditional wedding cost around $1,500 US Dollars. (1.7million won) And, the groom and the bride can rent traditional wedding costume, Hanbok. They offer free tour of the Folk Museum to every wedding guest.
3. Top 5 Wedding planners in South Korea
1) i-Wedding http://www.ifamily.co.kr/
2) Vernovia in Cheongdam http://www.vernovia.kr/
It is an open gallery wedding shop. It means you can choose wedding dresses or dresses to wear anytime. 80% of wedding dresses are all brand-new ones.
3) Denam since 1994 http://www.denam.com/
4) Hannah Wedding http://www.hannawedding.co.kr
5) Wooa Wedding http://www.wooawedding.com/
Do you know anyone getting married in Korea or Who will you marry in Korea?
Sending