BTS and G-Dragon in LA 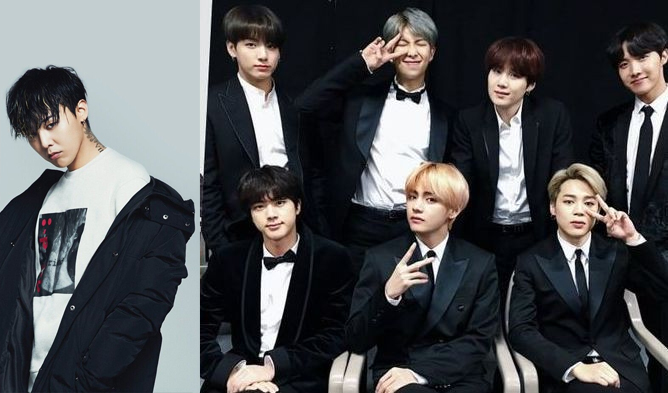 The California sun beat down on them hard. While RapMon had been used to the harshness of the climate, J-Hope and G-Dragon were both unused to it. As they continued to the nearest hotel it didn’t take long for them to ditch their outer layers. They felt confident that no one would recognize them in this part of town.

All three of them now had simple tees on and felt very content feeling the breeze on their skin. Almost immediately they had grabbed the attention of the L.A. people, in particular the women. It wasn’t often a group of vibrant young handsome men, especially Korean ones, casually walked around these parts.

As they continued walking they had noticed the stench of the streets. Unlike the cleaner and more maintained streets of their home country, downtown L.A. was more of the opposite. There was tobacco and smoke. The sidewalk was cracked and uneven. There was graffiti on stopped trains and they all held onto their pockets as they walked past some shady people. There was less fear however, as they were somewhat enjoying this newfound thrill of the true “streets”.

Their gamble that they would remain anonymous had worked. It seems that the light of K-POP had not shined too brightly in these areas. However they still had to be on guard now.

“Hey guys check this out!” J-Hope opened up his phone to his social media was kind of freaking out. People were finding out two members of B.T.S. and Big Bang leader G-Dragon were missing. Their sweat of heat then turned to worry. “We have to find a place to stay ASAP.”

They finally turned around the block and entered a family owned hotel joined called Oasis. To the boys it seemed very inviting from the lit bright blue sign, offers of a pool, and most importantly of all, air conditioning.

It was euphoric getting that initial blast of cool air from the inside after spending nearly two hours in the California sun. All three exhaled a single “Ahhh…” in unison. After they had acclimated to the temperature of the room they stepped forward to the front desk where a young girl had fallen asleep on the front desk. Her nametag read “Kim”.

J-Hope dinged the call bell once to no reply. He then hit it multiple times in succession to finally awaken the receptionist. “Oh! I’m so sorry I fell asleep,” She fixed her hair and clothes. “It’s just we usually don’t get customers these days.” She stood up to look attentive and put on a genuine smile. “How are you today? Are you looking to stay?”

RapMon answered with his best English, “Yes we are. We want to stay for a night.” Kim replied “Of course! We’d be happy to have you three tonight.” She registered them into her computer and handed them their keys. “Before you go don’t forget we have our house-made lunch and dinner.” The boys were also then reminded that they have not had a single bite to eat since they landed and were rightfully starving.

“We will definitely try it after we settle down.” The three of them proceeded to their room, which was the closest to the reception area. In fact this hotel was quite small. There were only six rooms, none of which were occupied.

They opened their door and were greeted by a cozy little place. “Hey! At least the view is nice.” J-Hope ran to the window showcasing their view of the graffiti wall of the adjacent building. Both G-Dragon and RapMon gave him a death stare.

G-Dragon made a judgment of the room. It was quite well maintained yet undisturbed. He felt a little bad as it seemed that she ran the entire place herself. He collapsed into the bed and was surprised by the soft embrace of the mattress. “I haven’t felt this kind of comfort since I was home…” He closed his eyes and imagined his mother coming in to tuck him in. Had it not been for J-Hope jumping on the other bed he would have certainly dozed off for hours.

“This is so bouncy!” He was jumping like a child. He however wasn’t small like one. RapMon pressed into the mattress synchronized with his jump. “Ow sh.t!” J-Hope’s head smashed into the ceiling and made a small indent. Dry wall and dust fell onto the bed.

“Woops…” RapMon covered his mouth with regret while J-Hope was rubbing the spot on his head where he hit the ceiling. G-Dragon was fully aware at this point and was rubbing the bridge on his nose.

They all looked up and noticed the profound indent J-Hope’s head made. “We can pay for that.” RapMon said. “Uh no. You’ll pay for that.” They chuckled. There was a knocking on the door from Kim. “Is everything okay in there?”

They all beamed at the door. “We are okay! Everything is good!” RapMon assured her. “Are you sure? That sounded kind of bad. I should come in.” She began to unlock the door with her master key.

“No no!” G-Dragon held the door knob shut. RapMon yelled, “We are naked!” Kim immediately unhanded herself from the door and ran back. “I’m so sorry please take your time!” She covered her flushed face.

Kim usually kept her manner when attractive men came through. But whenever she came close to them when they were indecent, she would lose her cool. And these boys she could tell were Korean. And little did the boys know, she was quite the K-POP fan.

“Phew, that was a close one…” G-Dragon turned around to a half-naked J-Hope and RapMon. “Why are you…?” He looked at them with confusion. They hurriedly pulled their clothes back on. “Just in case, if she actually came in we would actually be naked!” G-Dragon sighed.

“I don’t know about you guys, but some food sounds real good right now.” RapMon rubbed his stomach. “I need some ice.” J-Hope’s head still hurt from the jump. G-Dragon put his arms around the two of them and huddled them in. “C’mon! Let’s fuel up and get ready for our night in L.A.!”