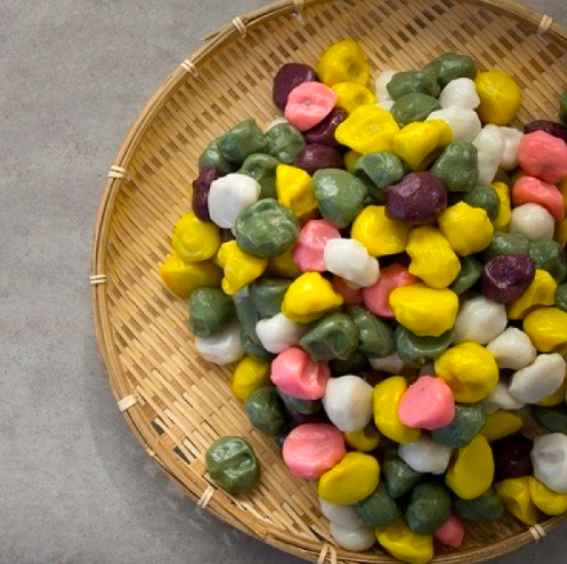 Songpyeon is a traditional Korean dessert which is usually eaten during the Korean autumn harvest festival, Chuseok. Historically, records of songpyeon date from the Goryeo era.

Songpyeon is a half-moon shaped rice cake that often contains sweet or semi-sweet fillings, like soybeans, chestnuts, jujubes, dates, beans, sesame seeds, or honey – then steamed over a layer of pine needles.

A pinch of strawberry Jell-o powder

To make the filling:

Grind the sesame seeds in a blender for about 20 secs.  Transfer ground sesame to a bowl and mix in brown sugar and a pinch of salt.

To make the dough:

Prepare 3 cups of rice powder and sift into a large bowl.

Divide the rice powder into 3 bowls. Each bowl should equally contain 1 cup of rice powder.

To prepare the basic white dough, add 3 tbsp of boiling water to the rice powder and mix it with a spatula. When the dough is cool enough, knead for about 5 mins. Wrap with cling film and set aside.

To prepare the green dough, add 1 tsp of mugwort powder and 3 tbsp boiling hot water to the rice powder and mix it with a spatula. When the dough is cool enough, knead for about 5 mins, then wrap with cling film and set aside.

To prepare the pink dough, add a pinch of strawberry Jell-o powder and 3 tbsp boiling hot water to the rice powder and mix it with a spatula. When the dough is cool enough to handle, knead for about 5 mins, then wrap with cling film and set aside.

To prepare the purple dough, add 1/4 cup blueberries and 1/4 cup water, then blend in the microwave for 45 sec then strain.

To assemble the Songpyeon:

Tear off the dough enough to make 1-inch ball. Make a well in the ball with your thumb, and stretch the dough outwards with both of your thumbs to expand the opening. Fill the well with tsp of filling, then seal tightly by squeezing the edges together. Squeeze the whole rice cake lightly in your and shape it to resemble a half moon.

Prepare a big bowl of cold water, then remove the rice cakes from the steamer with a tong or a spoon. Immediately immerse then into cold water for a quick rinse, removing all the pine needles. Then transfer the rice cakes to a colander to drain. Lightly rub the oil on the rice cakes. Serve warm.