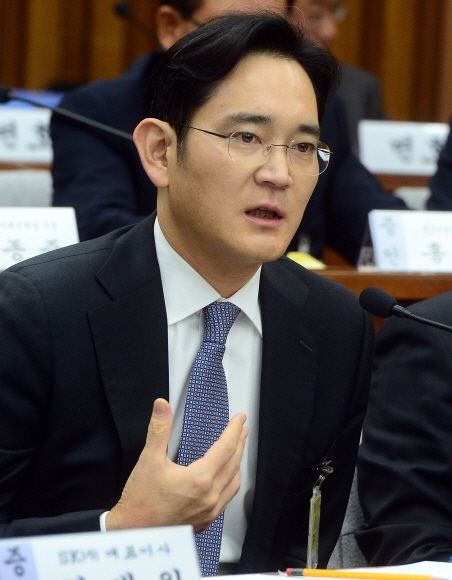 Samsung Group began as a trade business in 1938, and has evolved into the largest Korean business conglomerate, today.

Samsung is comprised of several businesses; most of them united under the same brand, which includes insurance, securities, retail, electronics industry, construction, shipbuilding and etc.

Jae Yong Lee – a.k.a. Jay. Y. Lee – is the son of Kun-hee Lee, the C.E.O of Korea’s Samsung Group and the grandson of the company’s founder, Byung-chul Lee.

Lee was born in Washington D.C, educated at the most prestigious schools in Korea, attained his M.B.A degree from Japan’s Keio University and was educated at Harvard Business School; although he didn’t get to graduate.

You could say Lee was strictly educated and molded to take over the family business from the time he was born. He is the first-born and the only son in his family. He is currently a divorcee with two children.

According to Forbes, Lee ranks as the 40th most powerful person in the world, with a net worth estimated to be 7.5 billion U.S. dollars; making him the third richest man in South Korea.

Lee officially became Samsung Group’s president in 2009, after working at the company as the Vice president of strategic planning since 1991.

In 2013, Lee was made vice-chairman of Samsung Electronics, the division that produces smartphones, TVs, cameras, hard drives and the various.

Lee has been considered the sole heir of the Samsung group since his father suffered a heart attack in 2014.
On February 16, 2017, Lee was arrested and charged for his alleged role in a political and corporate scandal related to Korea’s then president, Park. Lee is currently behind bars.

The favors included backing for a Samsung merger which helped Lee become the head of the conglomerate; a deal that needed support from the government.

However in court, Lee denies all these charges. He admitted to making donations but denied that he expected anything in return.

It was reported on August 7, 2017, that prosecutors demanded a twelve-year sentence for Lee.
On August 25, of 2017, after being found guilty of corruption, the convicted Samsung’s heir was sentenced to prison for five years.

Lee’s lawyers claimed they will appeal – but this probably will lead to an extremely difficult case of scenario – because even the president Park got impeached and is imprisoned. Her trials are still taking place.

In court, Lee described his knowledge of Samsung’s operations as limited and that he is still in the learning process.