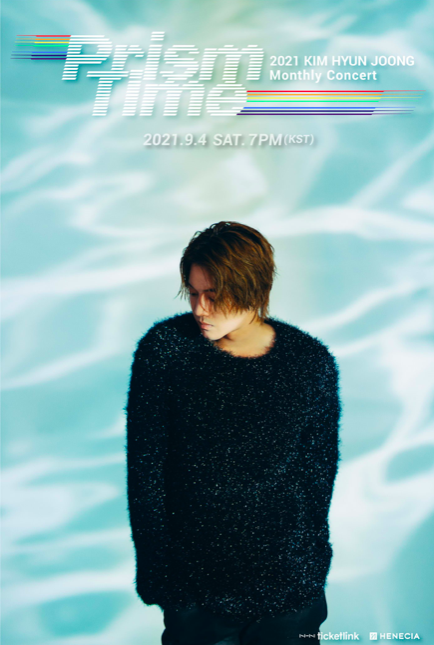 Kim Hyun Joong has announced the fifth of his seven shows for the monthly concerts [KIM HYUN JOONG Monthly Concert ‘Prism Time’] as the color BLUE. This show seems almost like an extension of the last concert, bringing calm and beautiful mellow vibes for all the fans. The fifth show of the concert will be held on September 4th at 7pm, with the theme of BLUE.

The last show, GREEN, left fans feeling comforted and light, away from the burdens of reality. Holding his sparkling green mic in his hand, Kim Hyun Joong entranced viewers with his emotional vocals.

From covers of famous songs like ‘Creep’ by Radiohead to talks with the fans through chat, Kim Hyun Joong amazed viewers with his endless talent. He made sure to make personal connections with each fan, having short talks between each song.

With every concert in the series, fans are growing with excitement as he never fails to exceed any expectations. BLUE is no exception, with the theme of [flying in the Blue].

Tickets for the fifth of seven concerts from [KIM HYUN JOONG Monthly Concert ‘Prism Time’] are available on MyMusicTaste, where they can be purchased as a single showing with merchandise or just for the live show. The fifth concert, BLUE, will be broadcasted live for ticket viewers to watch on September 4th.

Further information regarding ticketing and the show itself can be found through https://mmt.fans/MKES or through MyMusicTaste’s other social media channels.

MyMusicTaste is a fan initiated live event making service that brings fans, artists and promoters from all over the world together in one place to create a valuable and meaningful concert experience for everyone involved. MyMusicTaste puts the power in the fans’ hands, allowing fans to request their favorite artist’s concert in their city. With the mission to connect and amplify the voices of fans all over the world, MyMusicTaste successfully promoted concerts of artists such as EXO, GOT7, MONSTA X, The xx, Machine Gun Kelly, and more in over 57 different cities. With the simple idea–empowering fans to bring their favorite artist’s concert in the city of their choice based on fan demand–MyMusicTaste is challenging the $27 billion concert market through cutting-edge technology and sophisticated, user-friendly service. Currently, www.mymusictaste.com supports more than 30 countries and offers 15 different languages.

Established in 2018, HENECIA MUSIC is a South Korean record label and entertainment agency founded by the artist Kim Hyun Joong. With the new direction of Kim Hyun Joong’s music, the company was established to better aid all his solo activities and support the dreams of artists that aim to create content and connect with fans at a global level. Some major artists that stand along Kim Hyun Joong in the label are Atom Music Heart and Julia Dream. As a label that focuses on a sense of “togetherness” with fans, they are gaining recognition for the success of their work with K-pop indie artists to reach fans from all over the world.