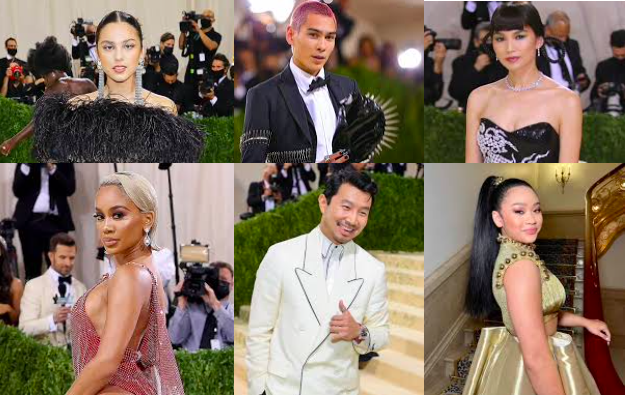 The Asian community has been quite lacking in terms of red carpet appearances for the longest time. The rather conservative peninsula has slowly been opening up to the world while using the opportunity to share its intricate cultures. 2021 has seen the biggest number of artists with Asian roots take the Met Gala’s red carpet by storm. The term artist, in this case, generally refers to one who creates art by use of creative imagination or conscious skill. Below are some of the Asian artists who showed up for the 2021 Met Gala’s red carpet.

The legendary K-Pop female rapper made a stunning appearance on the red carpet wearing Alexander Wang, a piece that took the denim look a notch higher. The hanbok-enthused silhouette off-shoulder denim coat was a reminiscent of the traditional Korean hanbok owing to its design and signature knot; with two long straps, on the dresses top portion. The Korean ambience was accentuated by CL’s unique hairstyle enthused by a traditional Korean headpiece that used to be worn by individuals of influence, mostly queens. 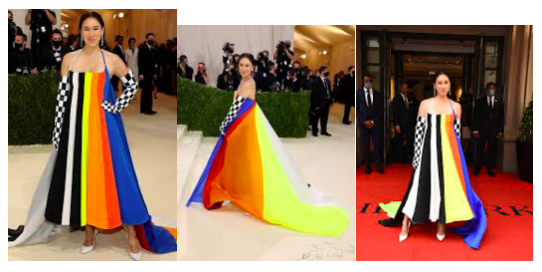 The fashionable Eva made yet another triumph at her lifelong career of making heads turn with her styles. Eva showed up at the Met Gala in Christopher John Rogers’s flamboyant block gown. The low off-shoulder frock of many colors elegantly displayed the diva’s collar bones, which were accentuated by the sleek short hair do. The bold and warm colored gown with a substantive satin organza train was heightened by the contrasting checkered opera gloves. 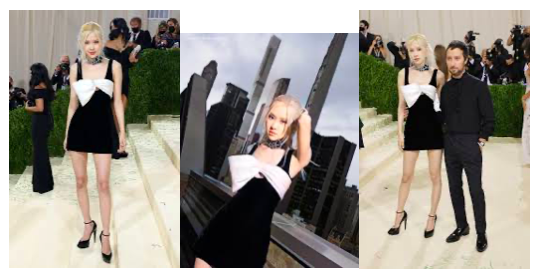 The Filipino-African-American hit maker made quite an appearance in a gown representing her deeply diversified heritage. The Christian Cowan elegant red gown; caressing the artist’s body into an art piece, turned heads as the diva gracefully rocked the red carpet. The gown contained countless hand-placed crystals and a train whose theme colors root from the Filipino and African-American flags thus representing Saweetie’s heritage. 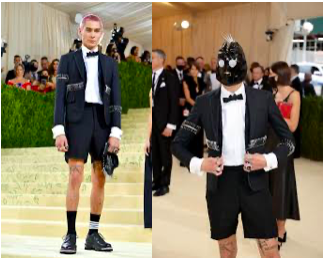 The Gossip Girl actor of Filipino-American descent paraded his tattooed thighs at the Met Gala in Thom Brown. The most striking fashion statement by Evan was his full leather face mask adorned with metal spikes. The rock-star and metal theme flowed throughout his outfit with striking silver rings and a dark blue short suit; whose blazer rocked a ring of safety pins artistically woven around the arms and waistline. 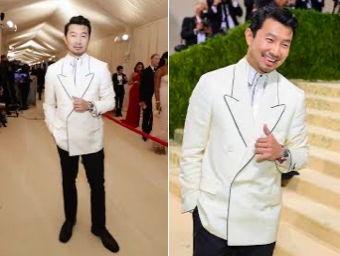 The actor; cast in the Legend of the Ten Rings among others, of Chinese descent showed up at the Met Gala in Fendi. Simu gracefully sported a white-on-white top look paired with a fitting slim black trouser and black shoes. The signature thin black outlines along the edges of the white shirt and double breasted jacket perfected the design’s elegance. 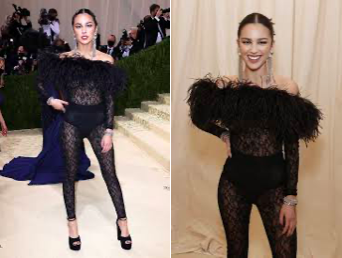 Lee, a Laos-Korean-American 2020 Olympic Gold medal gymnastics’ attended the MET Gala in an ethereal gold outfit whose overall theme was a tribute to her hard work towards winning gold in 2021 Tokyo’s Olympics. The two-piece outfit; with the top accentuated with gold baubles around the arm and collar, low gold open heels, gold hair band, and a complementing nail-do brought out the vibrant and glorious look. 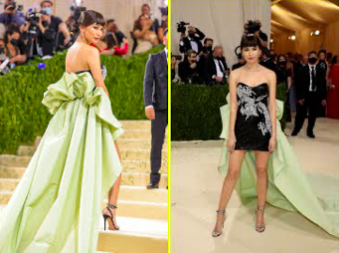 Gemma an actress of Chinese descent, born in London, graced the 2021’s Met Gala in Prabal Gurung; a Nepalese-American designer. The black sequin short dress with silver pearls; running diagonally from one end of the bust to just below the hip and creatively adding some sense of Chinese-enthuse character to the outfit. The dress is completed by an attached pastel green train which gives the outfit a flawless chicness. The complementing black stilettos accentuated with silver studs, silver necklace and earrings, and silver rings perfects Gemma’s overall elegance.