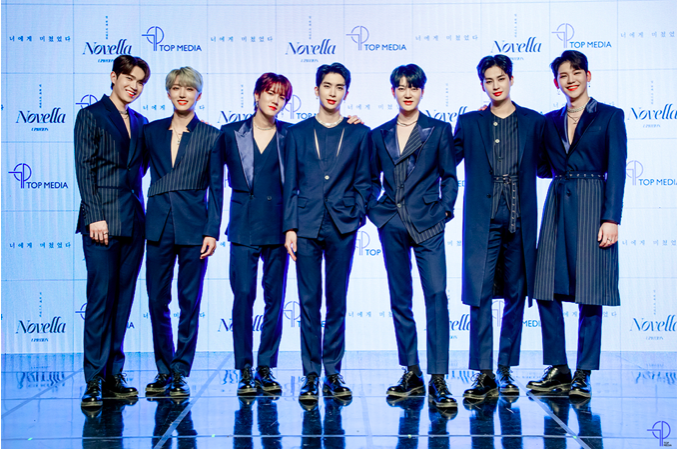 Q. How do you feel about making a comeback after 6 months?

KUHN: We’re back in 6 months. I think I was a little more immersed in working on the album because I wanted to show you a little more musical growth when I came back with a new album.

Q. UP10TION has returned with a mini album in nearly six months since its second full-length album was released in June last year! How did you spend your fall and winter?

HWANHEE: In my case, I’ve made music, too. The preparation time for this album was a little long, but we worked harder to prepare it. I spent 6 months looking forward to meeting HONEY10.

KOGYEOL: I think I was able to prepare while feeling excited while preparing for the album. 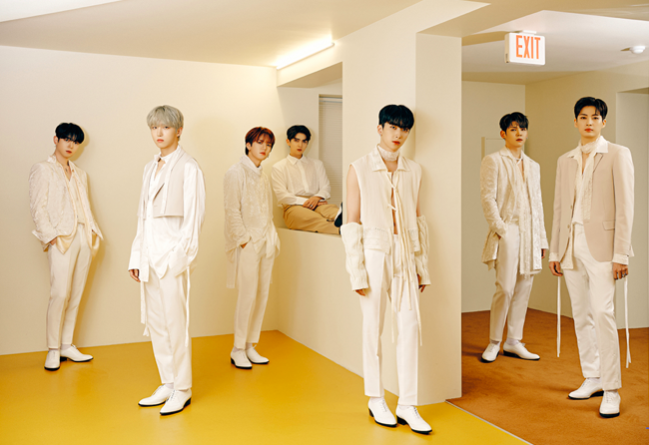 GYUJIN: The name of this album, Novella, means a novel. So the songs in the album also contain music that continues like a novel. It’s an album where you can discover new charms of UP10TION.

Q. Today is the day the album is released. [Novella] What kind of album is it?

SUNYOUL: This album expresses the process of love with a total of six tracks. ‘Give Love’, ‘Crazy About You’, ‘PANDORA’, ‘Incredible(雪來)’, ‘FALL’ and ‘SADENDING’ are songs where you can feel the storyline of love in six songs, and I personally think UP10ITON and HONEY10 are happy ending.

Q. When it comes to UP10TION, powerful performance! Refreshing sexiness! is the first keyword that comes to mind, and this time I think the atmosphere will be different from before.

HWANHEE: Of course, great performances are natural in this album, and we plan to show adult sexiness. and added a lot of emotions to that. That’s the feature of this album.

Q. Previously, if it was a powerful performance, this time it seems to contain a lot of emotions, but what kind of emotions did you add?

XIAO: As the title suggests, it can be said that a romance novel is expressed in music. We are going to tell you a story through UP10TION’s sweet voice that anyone can sympathize with the excitement, emotion, and pain of breaking up.

Q. It wouldn’t have been easy to capture emotions such as love, excitement, and parting pain, but what thoughts and efforts did UP10TION make to express their emotions?

KOGYEOL: The intro part immediately comes out with a lyrical and sad emotion from the beginning. So I think I naturally focus when I listen to the intro of this song.

Q. What kind of song is Give Love?

Q. SUNYOUL, please explain what the title song “Crazy About You” is.

SUNYOUL: “Crazy About You” is a song about love that has now become a past tense. The song contains the feelings that loved ones feel while recalling the memories they had together after breaking up. It’s a good song to listen to in the chilly and lonely winter. 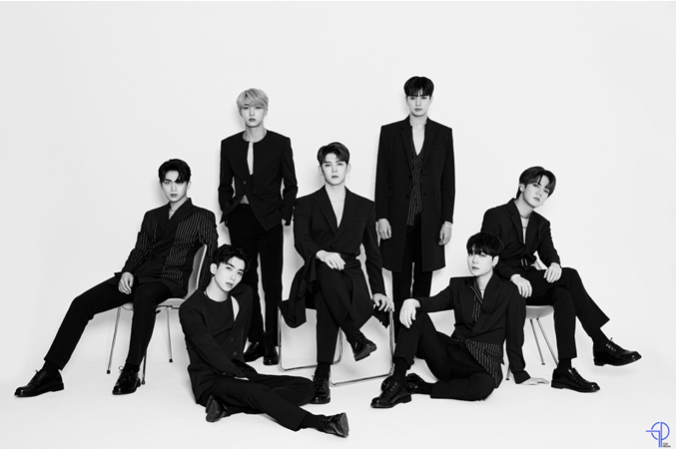 Q. Why did you choose “Crazy About You” as the title song, not the dance song you’ve shown so far?

KUHN: “Crazy About You” is the title song because it is a song that has not been shown so far and has a spirit of challenge and greed to digest new aspects well.

Q. When should we listen to “Crazy About You”?

KUHN: Everyone has painful memories of the past. Taking advantage of that sensibility, after a busy work, you can come home with your tired body, take a shower, and listen to a song while getting hit by water, which can lead to a dangerous situation that could explode the water bill.

HWANHEE: I can relate to the lyrics of “Crazy About You” first. When I listen to it by car or subway and pass through the Han River, it’s usually sad. The sadness and emptiness…

Q. Since the title song is “Crazy About You”, I’m curious. Is there anything that UP10TION members were crazy about?

HWANHEE: During this break, I fell in love with food so much. I was so happy to eat. I just felt happy eating delivery food, snacks, and jelly, so I gained 7kg. I took it out now, but… I was crazy about delivery.

XIAO: I’m not now, but I’ve been crazy about ice cream and jelly, so I always eat it when I see it, buy two to three at a time, and eat it instead of rice.

SUNYOUL: I was crazy in the past, I’m crazy now, and I’m going crazy in the future. I really like “Song.” I think I’ll be crazy about the song.

GYUJIN: Personally, I still have aftereffects, but I was crazy about HWANHEE. The charm of HWANHEE is overflowing…

Q. ‘PANDORA’ feels the most similar to the image UP10TION has shown! BIT-TO, please introduce yourself.

BIT-TO: PANDORA is a song with a stronger beat than UP10TION’s songs so far. It’s a song that HONEY10, who likes UP10TION’s music, would really like, so I competed with “Crazy About You” for the title song. It’s a strong song that worries you about the choreography just by listening to the beat. I hope you listen to it a lot.

Q. It’s a song that makes your heart flutter like the title ‘Incredible(雪來)’. Kogyeol, what is the song about?

KOGYEOL: It’s a song that expresses the excitement powerfully, although I think the title will make you feel lovey-dovey and excited. If you listen carefully, it’s not as romantic as you think, so it’s a song with an unexpected charm.

Q. I don’t know what it is, but I feel empty. Hwanhee, what kind of song is it?

HWANHEE: You got it exactly! It’s a song that expresses the sadness and emptiness of breaking up. It’s a great song based on band sound. 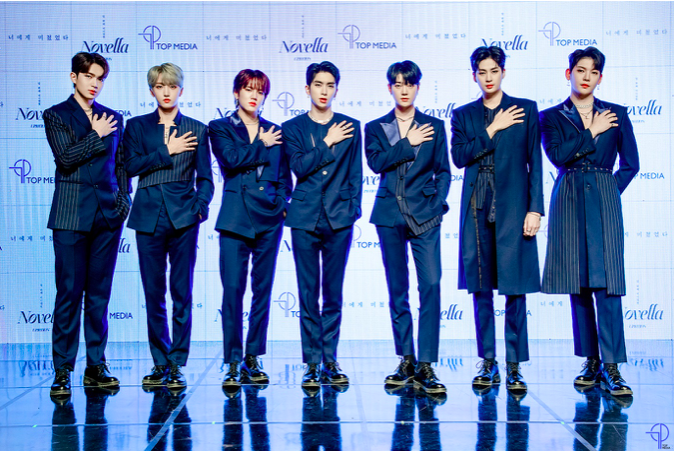 XIAO: As the title suggests, “SADENDING” is a song that expresses the pain of parting. It’s an R&B song. And, I participated in writing and composing this song along with “FALL”.

HWANHEE: KUHN and BIT-TO also participated in writing lyrics for all five songs except “FALL”.

Q. Since this album is composed of emotional songs, it would not have been easy to express the performance, but what is the highlight of the performance?

GYUJIN: In the BIT-TO type part of “Crazy About You”, there is a dance where GYUJIN and KUHN express watches, and I personally think that the dance is cool, so I would appreciate it if you could focus on that part.

BIT-TO: In addition, the point of this choreography is the shutter dance that uses hands as if taking pictures according to the lyrics of ‘Crazy About You’.

Q. I wonder what we can expect from UP10TION’s 10th mini-album. Is there anything you want to achieve for the new year?

GYUJIN: Thank you for the question. As it is a title song with a new concept, I hope many people will listen to it, and I will work hard to make it happen. It contains the passion of the members, so please look forward to it.
I hope more people know UP10TION.

KOGYEOL: I’ve done a lot of live performances, and I want to make sure that “UP10TION is a talented team” and “this team has its own strengths.”

Q. I wonder what UP10TION’s unique charm you want to show through this album.

SUNYOUL: It’s been 7 years, and I changed the mood of the song because I wanted to show a new change, but I want to show you a sentimental sexiness.

Q. UP10TION’s members KUHN, BIT-TO, and XIAO participated in writing and composing the song. What do you want them to focus on when they are working and listening to the song?

XIAO: Personally, I have a feeling of my favorite song. Like our title song, I like songs with pretty lyrics and sentimental lyrics. The songs I composed are also filled with pretty lyrics, so I hope you focus on the lyrics.

BIT-TO: I tend to look at the overall atmosphere when I work, and I hope you look at it as a whole again this time.

KUHN: I think I tried to write my part like a poem. I hope you can focus on the emotion of poetry.

Q. Which version do you think suits each UP10TION member the best?

SUNYOUL: I think it would be better to be happy than to break up.

Still: HWANHEE, XIAO, BIT-TO, KUHN
HWANHEE: The youngest members of UP10TION are now 25 years old. I was an adult before that, but personally, I think I’m a real adult now. So I think carefully that I can show you adult sexiness.

Q. It’s our first comeback in 2022. With UP10TION, we’ll share our new year’s wishes, aspirations, Please let me know if you have any New Year’s wishes and aspirations for each member.

GYUJIN: I want to let many people know about UP10TION. As it came out with a new concept, I hope “Crazy About You” will be a hit.

SUNYOUL: I hope there will be more days to meet HONEY10, and I hope everyone is healthy.

HWANHEE: I don’t fulfill my wishes or goals well, but I hope everyone is happy this time. I hope you have a happy year.

XIAO: It’s natural to be happy and I hope everyone is healthy.

BIT-TO: I hope there will be many opportunities to see HONEY10 up close, and I will do my best to make the performance satisfactory to HONEY10.

KOGYEOL: I hope we will work hard and get good results, and I want to put the first button well.

KUHN: I’m sure there were a lot of people who had a hard time in 2021. UP10TION’s new album “Novella” will be released with the start of 2022, so I hope our album will comfort you.

Q. Lastly, if there is a message of support or comfort through KUHN [Novella], please represent UP10TION.

KUHN: I think you must have had a lot of things to cry about as you spent the end of the year and faced a new year. There may be people who are excited about the new year, but I hope everyone doesn’t forget that they are the main characters of their lives. I hope this year will be a year of dreams, and health is natural. I hope you achieve your small wishes or goals. And I hope it will be a year where we receive the energy of a strong tiger with UP10TION’s new album. Happy New Year!

KUHN: In 2022, Lim In-nyeon and there are two members who were born in the year of the tiger, so we’ll work hard. Dear reporters, I hope that HONEY10s have a happy new year.

UP10TION: Happy New Year! Thank you so much~