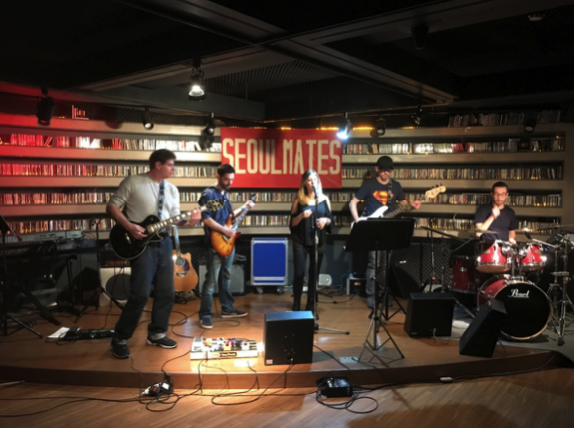 At KCrush America Magazine, we make it our mission to bring our readers fun and informative interviews of individuals who have inspiring stories to share with the rest of the world. Seoulmates is a musical band which was formed in Korea, which consists of members who are expats/foreigners, currently residing in Seoul, Korea.

We interviewed two members from Seoulmates who were gracious enough to offer their time for an interview. We expect this will be an interesting read for those of you who are seeking to know (more) about the band, or simply inquisitive about what life is like in South Korea, as a foreigner. We’d like to express “a big thank you” to Peter and Benjamin, and wish them much success in all their endeavors…

*Would you introduce yourselves to our readers please?

Peter: My name is Peter Daley. I’ve been teaching English at Sookmyung Women’s University for the past six years, and before that I taught English at Keimyung University in Daegu for 8 years. I’m one of Seoulmates’ two guitarists. I prefer to play rhythm guitar and let the other guitarist, the amazing Frédéric Plouzmann, take the lead guitar part on most songs. He’s a better player than me, so he inspires me to work harder and develop as a musician. Sometimes, we change roles which adds a nice variety from my perspective. I also play solo guitar at various venues and open mic. events and try to play with other singer and musician friends when I have the opportunity.

Benjamin: I am Benjamin, the drummer in the band, and also Community manager when it’s time to communicate on our events! In working life, I am CFO at a French chemical company.

*What made you come to Korea and how did Seoulmates form as a band?

Peter: A year before I moved to Korea, I visited Seoul for a few days from Japan where I was living at the time. I met my sister in Seoul who was in Korea to adopt her first child. It was such a memorable and moving experience that a year later, after leaving Japan, I decided to move to Korea. My first band, 2Much, had just broken up when our bass player moved back to New Zealand and the rest of us started playing music with other people more. Playing with 2Much gave me the confidence to reply to a Facebook post by Benjamin who was looking for a guitar player. We met and practiced a few songs together. It was essentially an audition. I got a great feeling from our first meeting with Ben and Emilie and our first bass player Francois, and they accepted me into their musical family. It was also nice to widen my circle of friends to include members of the French expat community.

Benjamin: I came to Seoul, two years ago to work for the Korean subsidiary of my company. I was living here with my wife and our two daughters. I have been playing in a band in Paris and I missed the music, so I started to create a music band with a French friend. We started bass and drums, then hired guitar players and finally our wonderful singer, Emilie joined the band.

*When and how were you inspired to start music initially?

Peter: Ever since I was young, I have loved a good melody. There’s just something magical about a unique and distinctive melody. I began playing guitar as a young child. Music has been part of my life ever since.

Benjamin: I feel very relaxed when we rehearse together, but excitement increases when preparing for a new concert: Also, when listening to inspiring songs with nice drums pattern, it makes me feel good to play them by myself.

Peter: I love the feeling of looking out at an audience and seeing everyone having a great time. To see people smile and dance to the music we play always gives me a huge thrill. It’s like time stands still, and whatever problems we (both audience and band members) are having in our lives just disappear, and our minds are full of the happiness and joy that only music can bring. I have also been pleasantly surprised when people I don’t know come up to me and tell me they saw me play guitar and enjoyed my performance. Those encounters, apart from being nice surprises, also motivate me to practice more and work on my stage presence. Another memorable experience was performing at Sookmyung Women’s University’s dormitory festival a few years ago. It was nice to be able to share my interest in music with some of my Sookmyung students.

Benjamin: I definitely like the few seconds of stress you can feel just before going on stage. It gives me some adrenaline, making me happy to play. Also, every time we play together; it’s different. You never know what to expect, and it sometimes gives me goose bumps when something new happens, or when you can feel a special connection between musicians.

There was a good moment during our last concert, when someone in the audience came to offer me a bunch of flowers. It was so nice, and so Korean style!

*What kind of music do you like to listen to, on a regular basis?

Peter: Although I play guitar in a rock band, I mostly listen to orchestral music and instrumental music. As I mentioned earlier, I am more drawn to melodies and harmonies than lyrics. That’s not to say I don’t appreciate a good lyric, and I do listen to rock music when in the mood, but I would say 90% of the music I listen to is purely instrumental. In particular, I enjoy the soundtracks of John Williams and Joe Hisaishi and the guitars of Joe Satriani, Steve Vai, and Tommy Emmanuel. Actually, tomorrow night (March 17), I’m going to see the LA Philharmonic in concert in Seoul perform a concert dedicated to the music of John Williams. I saw Joe Satriani and Steve Vai performed in Seoul in 2017 and Tommy Emmanuel will perform at the 13th Seoul Jazz Festival in May. That’s another thing I am grateful for: the opportunity to see and hear my favorite artists in concert.

Benjamin: I listen to many different styles of music, every moment has its own style: jazz or classical music to relax, electronic or brit-pop for more dynamic time

*What do you most like about Korea? How has your life changed since coming here?

Peter: My life has changed in many ways since I first arrived in Korea in December of 2003. That is of course a significant period of time. I have certainly developed professionally as a teacher of English. It may sound corny, but I feel I “found myself” in Korea in that I live in an environment that provides opportunities for me to pursue for all my interests. What I like about Korea these days is simply the life I have here. I am grateful for my job and my circle of friends from all over the world, including of course Korea. I am grateful for the opportunities to assist North Korean defectors through TNKR. And I am grateful to have the chance to play music with Seoulmates and other friends. Korea has been very good to me, and I hope I can repay that by volunteering, working hard for my Sookmyung students, and hopefully giving pleasure to others through playing guitar.

Benjamin: Despite big cultural differences, I like how Korean people are curious and want to know about our home country. I also appreciate a lot how people are helpful for any kind of administrative things, or to find the good place to go. Korean people are really helpful and kind. I will keep for life a very unique and close relationship with Korea since my second daughter was born in Seoul. 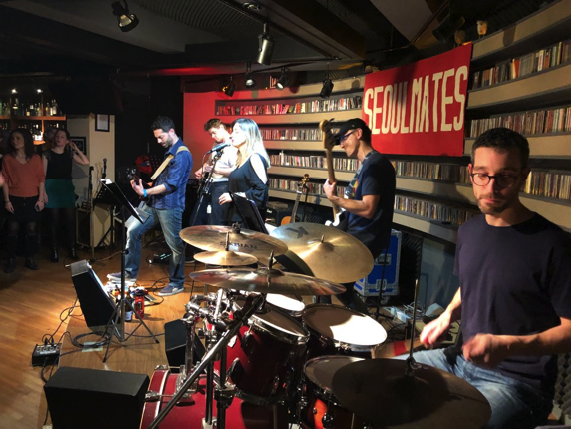 *What are your interests and hobbies outside of music?

Peter: I read a lot and I read a variety of kinds of books. I try to exercise four to five times a week. I also volunteer with Teach North Korean Refugees, an NGO that provides free English lessons to North Korean defectors.

Benjamin: I like to ski in winter time, or just to get lost and visit new places in Seoul.

*What do you do to release stress?

Peter: Music, TV, reading, and exercise all help me in times of trouble. I love escaping into a good book or TV show. Playing guitar at home always relaxes me as do long walks with my favorite music. A good workout helps result in a good night’s sleep, and I love the post-exercise high a good workout provides.

Benjamin: I go for a walk or drink a beer!

*Where do you wish to perform the most in the world?

Peter: My performance goals are not that grand. I really enjoy playing for close friends. Of course, playing at larger venues would be a huge thrill. I can’t imagine what the members of Queen felt when they performed at Wembley Stadium for Live Aid, but there is something about a smaller and more intimate performance with friends that appeals to me.

Benjamin: I wish Seoulmates could play in a crowded stadium, with huge drums and dozens of loudspeakers! Maybe we should call the Olympic stadium to book a date…

Peter: To stay healthy and fit and to work hard for my students. Musically, I hope to improve as a guitar player. That is a never-ending goal which is more journey than goal. I hope to play more with SeoulMates and to gradually add to our repertoire of songs. I also look forward to our gigs. The more the merrier!

Benjamin: A full year of new concerts and new experiences for Seoulmates in Korea!